Sexual Healing!! Yep - It sure is and here's why! 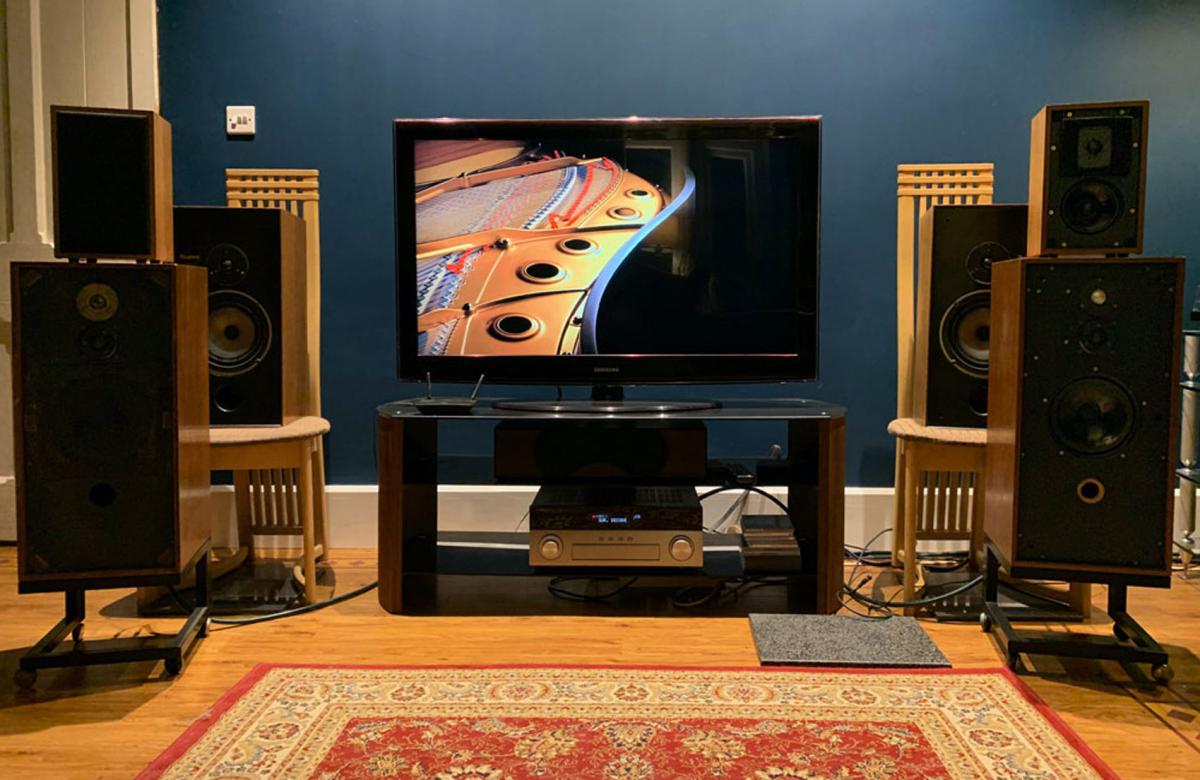 Yep - Sure is!! But what the deuce has it got to do with this pile of old speakers? Have you just been clickbaited?? Well you sort of have, but not in a bad way if you like piles of old BBC inspired speakers (we do!!) then read on - and yes, Marvin is definitely in here somewhere!!

Now since I became a purveyor of fine audio reproduction equipment, (Hi-Fi Dealer really - but I’m going off that, it sounds too much like ‘Car Dealer’ and I want a more glamorous title), I have gotten myself access to some pretty tasty HiFi equipment. It may be something I have on demo, or have ordered for a customer, or it could have been something alien looking and unearthly sounding at a HiFi Show, made of unobtanium and costing about the same as a new kidney! However despite having access to such amazing things I can’t help getting pulled back to certain old speakers that I am particularly fond of, perhaps not as accurate (at least by modern standards), or not as technically impressive and certainly not as bling.

If you have read my other blog posts you may realise that I have touched on this before… the age old battle between perfection and imperfection, analogue and digital, lovely grainy old colour photographs with a strange orange cast vs. pristine and huge digital images. One is impressive and the other is downright nice! Artistic! It is something that pulls on the human imperfection part of us… the grainy inner-self, the perfection of our imperfection. Sentimentality and mushiness have no scientific measurable quantity, they are qualitative only and humans are essentially analogue beings, full of imperfection.

When I get asked, ‘What is your favourite HiFi speaker?’ (us purveyors of fine audio reproduction equipment do ask each other that sort of thing), I usually say ‘Spendor BC1’. It’s a sort of default answer for me, based on memory and sentiment. The truth is I have been saying this for years, yet for years I didn’t own a pair… I just remembered that I really liked them and had fond memories of listening to them back in the early 90s (they were already old and battered then!!). I sort of feared getting another pair in case they sounded awful! You know that feeling? I remember telling Mrs. Phonostage once that one of the funniest things I had ever seen was Eddie Murphy ‘Raw’, which I had watched decades ago with my mates. So I put it on one evening and to be honest I wish I hadn’t - it was of it’s time, and of my time, and it really didn’t work for us... I forced out a couple of laughs and made some excuses like ‘you had to be there’ and turned it off!

So from one blast from the past to another, quite out of the blue, I was recently given pair of Spendor BC1s that needed a bit of work. I had no idea if they would work (and neither did the nice chap who gave them to me), however I did end up getting them up and running and set up for a good listening session, with mixed expectations.

Now you can see from the picture that Heath Robinson helped me to set this lot up. I kicked out the trusty Totem Hawks and of course then had no stands (the Totems are floorstanders), so I put a pair of Rogers LS40 (cost me 40 quid) on our dining chairs, some LS3/5a on the top of them and the Spendors (still limping with a slightly poorly driver - but working ok) in front of them on their ancient stands. Now before any HiFi purists ex-communicate me remember please... this was fun! I set up an Exposure XM CD player and also Amazon HD streaming at HiRes with a few favourite tunes. Radiohead ‘Paranoid Android’ and ‘No Surprises’ then a bit of Steven Wilson, also ‘Yoshimi Battles the Pink Robots’ and a surprise entry coming in at number 5 - Marvin Gaye ‘Sexual Healing’.

I used to read loads of HiFi reviews, dreaming about stuff I couldn’t afford (still can’t!), and one thing that struck me was the choice of music of the reviewers. Some of it was a bit Haute Couture and there was much classical and obscure jazz, then one of them would throw in a curve ball like System of a Down or The Dooleys! I have now realised that after a bit of time one starts to collect a group of benchmarks and reference pieces. There might not be anything obvious about that track to many - but to the person writing they are listening for a particular something that they can use as a comparator. I am going to be doing a feature on this - something like ‘how to listen to music’ or something. Well the curve ball in my case is ‘Sexual Healing’. You will have heard this on the radio a gazillion times and thought nothing of it, but if you put it on a decent HiFi at a semi-decent volume it comes straight in with a superb drum sound that promptly herded in a wave of of electronic dance and techno music and really un-settled quite a few session drummers! It was the Roland TR-808!! Try it yourself? Maybe with headphones on if you don’t have particularly good speakers, it is straight out of the gates with a sound that you could reach out and grab! This was a very early - and very famous early adoption of the famous Roland TR-808, the drum machine that changed music for ever!

This recording has analogue niceness all over it. The crunchy beats, the solid thud of the bass, the  claves (they are not real) - the whole thing. If you are a lover of analogue synths or early house or any of that sort of thing then have a good listen. It is a unique track and shows up the differences between one pair of speakers and another very well…

The sounds I really like - the ones that make me like a piece of equipment more (or less) are sounds like the resonances of an analogue synth - you know, the fizzyness of it, not always the main notes themselves. Then percussion - sometimes hidden from view behind a guitarist or a drummer. Like the ones in Paranoid Android, I don’t know the names of them all but I recognise a lot of them from school!! The better the gear, the better I hear them, they are hard to hear and need good separation. Also acoustic guitars, sometimes hidden in a rock track, there’s often one in there somewhere! The aged speakers in the room on this picture have seen better days, they are lightly battered! However these are all fine speakers and they do a superb job of picking out the sounds I like and in order of preference (last one being the favourite), it is Rogers LS7, LS3/5a and then the trusty BC1. (Though please note the LS3/5a is extremely hard to beat on a desktop or in close proximity!)

The BC1 was the most fun of all, partly because I was right after all these years and partly because they were really holographic, more than I was expecting and more than I thought possible for such and old pair of speakers! So much so that it had me Googling ‘BC1 soundstage’ while I was listening to The Flaming Lips.

SO the next session is Neil Young - and that is a percussive, acoustic guitars-fest of the first order and I can’t wait! For the first time in ages I can’t wait to go and sit down and listen to some of my favourite tunes and that is a great feeling.

If you think you have a favourite pair of speakers from years ago, old ones, worth a tiny fraction of what you have now, then just do a quick mind-check and ask yourself if you are enjoying music as much as you were then. You may need to dig deep in the inner-self and know what you really do desire. For me I have had a definite epiphany. I am not giving up the long upgrade, and can still drool over gorgeous kit, however I am going to stay along the lines of the old BBC designs that give me so much pleasure.

Just one more thing I have learned in my years of HiFi adventures is to love your gear - bu don’t stop listening to the music! And the other night - after an hour or two of swapping and changing speakers - I really did get into my music…