The History Of Vinyl Records 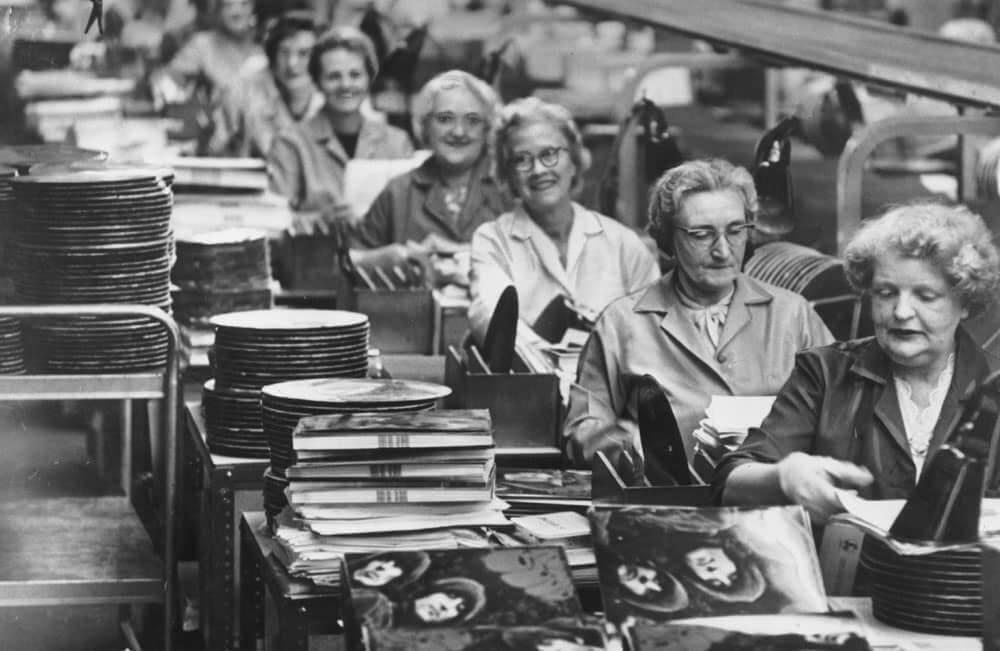 The rise, fall and resurgence of vinyl is a period spanning almost a century. For audiophiles everywhere, it remains the singular most impressive format of recording and reproducing music.

The major period for vinyl was from the inception of the vinyl LP in 1948 to 1988, when CDs outsold records for the first time. However, it was long before vinyl became vinyl that it was on the way to becoming the world’s main music format…

Returning to vinyl’s conception takes us to the creation of the phonautograph by Édouard-Léon Scott in 1857. While Scott’s invention recorded sound in the form of visual wavelengths and frequencies, there is no evidence to suggest he used the information to reproduce the sound.

It was only in 1877 when the phonograph was invented by Thomas Edison that sound could be both recorded and reproduced.

Edison initially used tinfoil over a grooved metal cylinder. A sound-vibrated stylus would leave indents in the tinfoil when the cylinder was rotated, which could be played back immediately. Later Edison would use a hollowed wax cylinder instead of tinfoil.

The term ‘gramophone’ was coined by Emile Berliner whose system played lateral-cut disc records. In 1889 Berliner’s discs were first marketed in Europe. The discs were around 5” in diameter and were played primarily as toys or for curiosity, due to poor sound quality.

With plans to gain traction in the market with an entertainment system, Berliner worked on creating better quality gramophones, along with 7” records. However, in comparison to Edison’s wax cylinders, Berliner’s gramophones were still of considerably poorer quality.

It was only when Berliner invested in the help of associate Eldridge R. Johnson, that the Victor Talking Machine Company was formed, bringing with it the improved the sound quality of gramophones, allowing them along with lateral discs to go on to dominate the market.

In 1910s discs were triumphant in taking over from their wax cylinder counterpart, although Edison continued to create the cylinders until 1929.

Early recording was done entirely acoustically by collecting sound from the horn, which was then piped to a diaphragm which in turn vibrated the cutting stylus. The acoustic recording technique proved difficult for musicians, with singers needing to nearly put their face in the recording horn to be audible.

In 1925 recording technology was advanced by Western Electric, whose engineers established the capturing of sound with a microphone and using vacuum tubes as an amplifier.

Initially the discs were composed of zinc, which would be covered in a thin layer of a compound of beeswax. This was then etched by a vibrating stylus, marking a groove on the disc. The disc would then be submerged in chromic acid allowing the previously imprinted groove to be played.

Later the discs would be created from a shellac compound, which continued to be used until the 78 rpm format was abandoned in the 1950s.

During the Second World War, US Armed Forces produced large amounts of 12” 78 rpm ‘V-Discs’ for troops overseas. These were made largely of vinyl, as a more durable and flexible equivalent to shellac.

Vinyl continued to be used after the war as a more lightweight solution suited to the newer record players.

Throughout the 20th century, vinyl was the go-to source for music reproduction, dominating the market for an entire century.

It was only when Phillip’s Cassette was released in 1962 that vinyl had its first whiff of a real competitor. The digital equivalent was a portable contender that could rewind, fast forward, play, pause and stop with the touch of a button.

With typically 30 to 45 minutes of audio each side, the cassette tape was a more functional equivalent to what was in comparison a bulky and frail music format.

1974 offered a glimpse into a ‘Tomorrow’s World’ style future, where physical records would succumb to technology, as Phillips begun developing Compact Discs. The year marked a milestone in music reproduction, representing what would become the beginning of digital downloads.

In 1988 CD sales outnumbered vinyl for the first time. According to the Recording Industry Association of America, CD sales doubled those of vinyl, selling 150 million copies compared to vinyl’s 72 million.

After decades of music seemingly disappearing into a computer hard drive, January 2017 reported the highest number of vinyl sold since 1991. In 2016 vinyl had reached a 25-year high, with more than 3.2m LPs sold.

2016 was the ninth consecutive year vinyl had grown, with 2m LPs sold in the UK in 2015. In 2014 vinyl was the only physical format of music that had increasing sales from its previous year. UK sales had increased five-fold between 2009 and 2014.

The renewed interest in vinyl was sparked in 2006, where the UK’s interest in indie rock took off, alongside the release of Arctic Monkey’s debut album, ‘Whatever People Say I Am That’s What I’m Not’.

2016 saw the deaths of iconic musicians including David Bowie, Prince, Leonard Cohen and George Michael. The loss of highly regarded artists is considered a large factor in 2016’s surge in vinyl sales, with fans buying mementos of their musical icons. After David Bowie’s death he became the bestselling vinyl artist of 2016.

The event has its headquarters in the US, but takes place officially across a number of countries including the UK, Ireland, France, Germany, Japan, Mexico and Australia.

On a Saturday in April each year, records are pressed just for Record Store Day, which are then distributed only to stores which choose to participate in the event.

Record Store Day has had a huge impact in the culture of records, encouraging both those who grew up with vinyl and those who are new to it to support both independent record stores and vinyl as a music medium.