Available for dispatch
A note about availability and shipping
Only %1 left
£640.00
Be the first to review this product

The Elevator EXP will give you hum-free sound, purer bass, greater definition and much more of your music.

In the beginning you'd buy a step up transformer (S.U.T.) to be able to use a moving coil cartridge. But they hummed and did weird things to the bass. The Elevator EXP changes all that.

The Elevator EXP is supplied with the PSU1 power supply, and a choice of voltages and power plugs.

You will have to exercise a modicum of patience once you have placed your order! These products can take a couple of weeks to get to you - many are assembled from scratch once you place your order, by a real person on a real bench!! .. but it will be well worth it!!
If you have any questions about these products please don’t hesitate to ask us - if we can’t answer the nice chaps at Graham Slee will save us!!!
We sell the entire range here at Phonostage Records and are proud to do so - so enjoy your shopping experience and GO TREAT YOURSELF!!! You deserve it!
01772 871233
Skip to the end of the images gallery 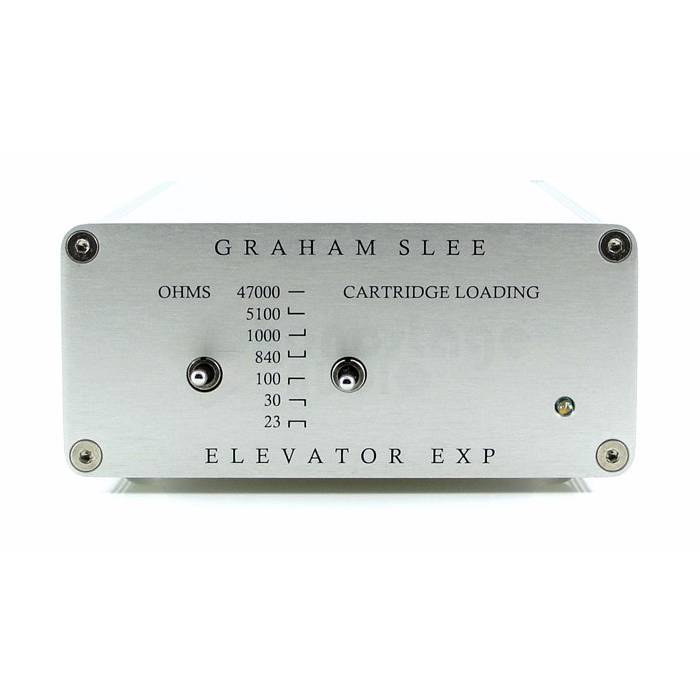 The Elevator EXP is designed to step-up the tiny moving coil signal to the moving magnet level of a hi-fi phono amp input.

It Also Let's You Adjust To Taste

Whereas some moving coil cartridges will happily give their best with 100 Ω loading, others can be quite particular.

Rather than fiddling around with links or DIP switches, the Elevator EXP gives you all its loading options up front, right there on the front panel - making it easy to get your sound right.

The Differences Between The Elevator EXP And S.U.T.s

For a start, the Elevator EXP doesn't hum. Transformers do. To be correct, the transformer itself doesn't hum, but the magnetic surrounding fields easily get induced into it.

The SUT, being a transformer, is influenced by them all. The result is hum. No matter how well shielded its case or how well you carefully position it, in most cases that isn't very successful.

The Elevator EXP is an amplifier - it doesn't contain a transformer so it's harder for hum to be induced into it.

Part 2: weird things to do with the bass

Bass frequencies are the lowest audio frequencies, below which everything becomes DC or direct current. DC doesn't commutate from positive to negative - it doesn't 'cycle' - so it cannot be transformed. Low bass frequencies to a transformer move so slow that they're 'almost DC', As a result transformers distort most of all at low frequencies.

All sorts of tricks and adjustments are employed to reduce this distortion - many include the use of expensive metals and labour intensive winding techniques in a bid to overcome the bass distortion. This is why good S.U.T.s are so expensive.

But the distortion is never really overcome and in the place of detailed bass, all the transformer can really do is 'fudge' the sound. You might have heard people refer to the bass they get as a 'smooth chocolatey sound'? I suppose that's similar to fudge...

The electronics of the Elevator EXP however, don't cause anywhere near such levels of distortion, so all the bass details - the layering and the timbre (the characteristic sound of an instrument or voice) is there to be heard and enjoyed.

Has it a power supply? No. So obviously it uses some of the signal as excitation current.

That would be OK but for the fact that magnetic cartridges don't have a linear response - their bass is much weaker than the highs, and so more is 'stolen' from the lows.

That's the reason you'll often see additional components inside a S.U.T.'s casing - these being used to straighten-out the frequency response.

I think you'll agree by now that the Elevator EXP step-up amplifier is the better option.

The Elevator EXP must always be used between cartridge and a moving magnet sensitivity input. It must never be used 'post EQ' - after the moving magnet phono preamp.

The PSU1 power supply is supplied with the Elevator EXP

Specifications subject to alteration without notice in keeping with the manufacturers continuous improvement policy.

...the Slee provides better and more natural dynamics. The leading edges of notes are sharper, crisper and more 'real'... the Slee provides better focus along with a deeper and wider soundstage. Though some may say the sound is more 'clinical' than a step up, I'd term it as more transparent. On the best recordings, you really do get the sense of 'being there'. Once you experience this sense, it is unmistakable and something that follows you around to every system you will ever experience."
(using the Elevator EXP as a front end system in conjunction with a MM phono stage)
- Scott Faller, "Vinylly Yours Virtually", EnjoyTheMusic.com, February 2010

OK I'm going to nail my colours to the mast... Lucio has banned us from saying "best I've ever heard" "never heard anything as good" etc as it begs the question "compared to what?" and is often meaningless hype. But here I've listed the runners and riders, added the caveat "in my system and room" and finally "to my ears", so here goes. The Era Gold + Elevator EXP is the best phono combination for MC's I've ever heard - period...
- Geoff Husband, TNT Audio, July 2002

...you obviously will need a step up transformer or head amp of some sort. I've got an old Signet MK12T (Audio Technica) that I use on occasion. It sounds fairly decent and is supposed to have some cool iron in it. In this case after flipping back and forth between it and my Graham Slee Elevator, the choice was more than obvious. The Slee it was.
- Scott Faller - EnjoytheMusic.com: Yamamoto Sound Craft YC-03s Moving Coil Cartridge - 2009