The latest incarnation of one of the most revered loudspeakers of all time!

We can't just spend ages here waxing lyrical about the LS3/5a, it is all out there to be read and absorbed. This is one of the most famous speakers of all time! Incredibly Spencer and Dorothy Hughes' legacy of developing speakers to conform to and exceed BBC specifications lives on with the Stirling Broadcast range. Not only has the LS3/5a V3 exceeded the specifications laid out by the BBC in this instance, but Derek Hughes himself - the son of Spencer and Dorothy (Spen/Dor - Spendor.. Get it?) is partner to the development of these gorgeous speakers with Doug Stirling.

Phonostage Records is proud to be able to sell the full range of Stirling Broadcast speakers and we will be keeping a set here on demonstration - that is no chore!!

Available in some gorgeous finishes by cabinet makers of the first order and using the best crossover ever used in an LS3/5a, the V3 is a superb step into that fabled BBC world! 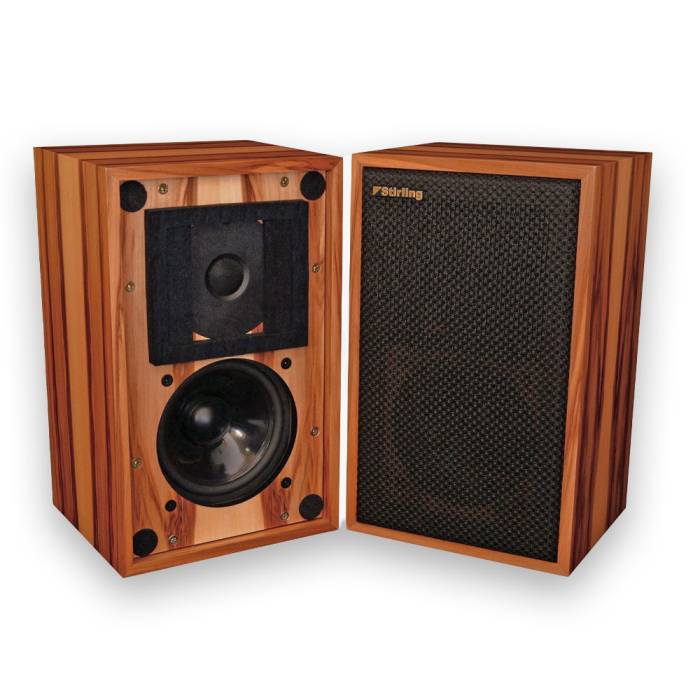 The new crossover, designed by Derek Hughes, is considerably larger, being just 16mm smaller all-round than the front baffle, and incorporates much larger components including closely matched air-cored inductors to remove the saturation experienced with ferrite or iron cores. The crossover is mounted on the rear panel, as for the Kingswood Warren prototype versions, to further decrease distortion.

Due to the higher cost of the new crossover, the Stirling Broadcast LS3/5a V2 will remain available should customers prefer this model.

The LS3/5a V3 comes with a 5 year warranty and the assurance of the future availability of spare parts.

A note about lead-times: All Stirling Broadcast loudspeakers are hand-built to order and as such lead-times and manufacturing times can vary. If you would like to order a pair of these we are able to contact Doug Stirling to get some idea of timescales... just let us know.

A note about veneers: Due to the ever-changing nature of trees! Veneers are not absolutely consistent and neither are their colours. These are natural products and you should expect variances. Please only use the swatch colours as a good guide - not as a guarantee.

“According to Doug it’s the first time that components of such high quality have been used in an LS3/5a.” - Jason Kennedy - HiFi+ Aug 2019