Available for dispatch
A note about availability and shipping
Only %1 left
£1,200.00
Be the first to review this product

So how does it sound?

According to Paul Szabady of the Stereo Times: "The soundstage always exceeded the boundaries of the speaker placement, and with the higher performance front-ends, the boundaries of the listening room itself. The ambience of the recording venue was always captured with a refreshing clarity and orienting naturalness, and instrument placement was so precise that it triggered synaesthetic visual response. Music-making, as with the MM Accession, was direct and faithful, completely devoid of artistic distortion." 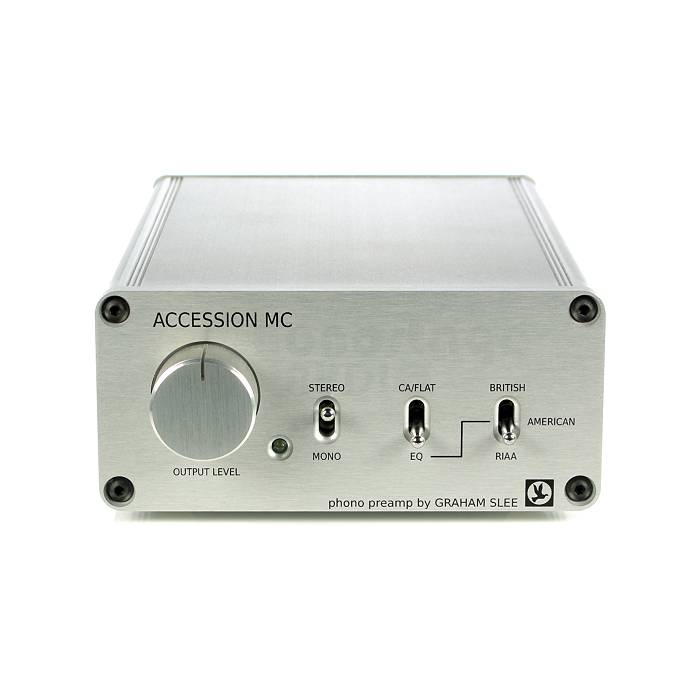 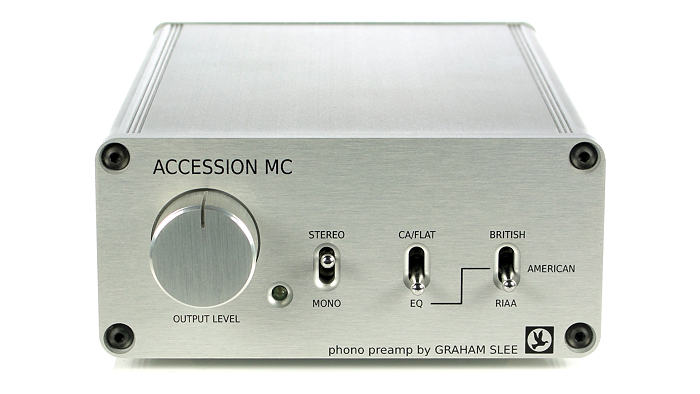 All is not what it seems...

Yes it would! You see, RIAA EQ is a compromise built on the limitations of the 1950s, when one problem created another. And that's all because of the cartridge...

Simply put, magnetic cartridges don't have a flat output. News to you? Well it would be, as you've always been told different. Your cartridge might have come with a plot showing you how flat its output is? But they use a constant velocity test record!

The cartridge output actually rises by 60dB (one thousand times) between 20Hz and 20kHz. And to make it so valves could cope, RIAA obliged by putting a kink right in the middle of the record's frequency response and some boost in the lower bass. And it's been like that ever since, and probably always will.

You have a non-flat cartridge reproducing a non-flat record, all designed for 1950s reproducers, and you're spending a fortune expecting great results...?

Right to this day phono stages apply cut as frequencies increase, curtailing it for a couple of octaves in the mids (the RIAA "kink"), then continuing until some cut-off point. They treat the entire signal as if it's "the recording curve" (which it isn't). And each manufacturer has a preference for doing it actively, or passively, or both, or splitting the curve, and so on... 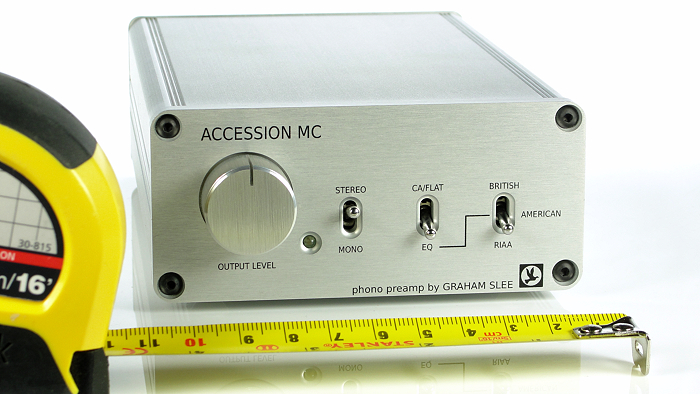 The Accession MC measures small in size but big on performance

The Accession MC (as well as the Accession MM) gets straight down to business by equalising the cartridge first, thus answering the age old question: "wouldn't a constant EQ slope be better?" (we did it and we patented it)

It then has the simpler task of correcting for the record's 20dB of combined kink and boost. It even has a constant amplitude "flat" output, just in case they ever record records flat (and acoustic records never sounded so good!).

So now, at last, you can expect great results!

And with the NEW PSU1 Enigma micro-signal power supply those results will be even better!

The standard PSU1 power supply has powered our phono stages, MM and MC, through a number of great reviews since its introduction in 2000.

However, Graham Slee had refused to accept moving coil as superior no matter how hard he tried to the contrary, which simply led to us making better and better MC phono stages, which have delighted our ever increasing customer base... but not him.

During development of the Accession MC he found the much revered technique of PCB ground planes could be improved by also hard wiring ground returns. According to the experts this makes absolutely no difference, but the difference was immediately audible (all Accession MCs are supplied with ground paths hard wired).

So his thoughts turned to the PSU1, and the application of Kirchhoff's current law and its violations. 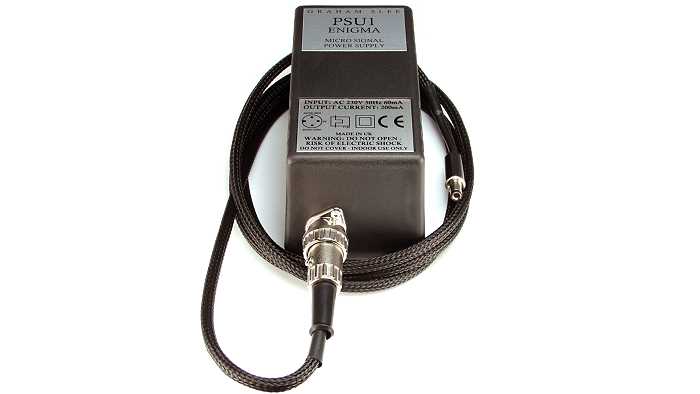 Something he'd witnessed developing other circuits sprang to mind and investigating the PSU1's energy storage (the reservoir caps) it occurred to him that by fitting capacitors which met very particular rules, the "microscopic" signal currents, which according to him, were not being treated equally, would improve matters greatly.

Frustratingly there was just one value in only one capacitor range capable of meeting those very particular rules. These were obtained and it made such a difference that he now prefers moving coil!

The PSU1 Enigma is equipped with a specially made DC cord, originally auditioned with the standard PSU1 where it made no difference, but it definitely does with the PSU1 Enigma! - Check the listing options to select your Power Supply of choice 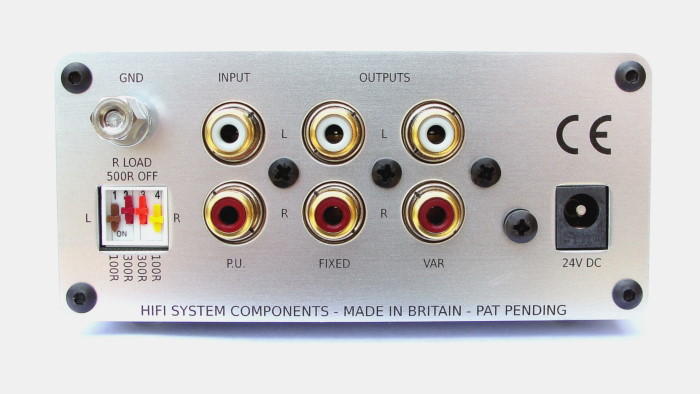 So, what else has the Accession MC got going for it?

It provides 4 cartridge loading options: 1] the standard 100 Ohms many MC cartridges are specified as; 2] 300 Ohms. Why? because it is logarithmically the double of 100 Ohms and our hearing is logarithmic; 3] 500 Ohms - the maximum the design can do without compromising noise; and 4] 75 Ohms by selecting both 100 and 300 Ohms.

A manual volume control active on the variable "var" outputs which can be used if the Accession MC is to drive a power amp directly. Required power amp input sensitivity will depend on the cartridge output, but a 0.3mV cartridge will cause around 350mV at the variable outputs. Also note this volume control can go fully clockwise without adding distortion to the Accession MC outputs (awesome!)

RIAA is the standard recording EQ for most records, so that's right-hand switch down. But you might have (or could obtain) some older long playing classics from the 1940s and 1950s recorded to NAB or FFRR - those were the most popular American and British EQs before RIAA. And what is CA/Flat? It's what the record really sounds like without any equalisation: it is the Constant Amplitude output after applying the Accession's cartridge equalisation to make it Flat.

Adding left and right channels together and dividing by two means mono records played on a stereo cartridge will sound mono, and that's what the Accession mono switch does. Use it to remove the left-right swaying effect a slightly eccentric mono record can have. This A+B/2 switch will not render stereo as true mono, giving a "tunnel" effect to stereo sound, so ensure it's switched up when playing stereo records.

Recording while you listen

The variable output can also be used to feed a digital recorder (or even a tape recorder!) whilst you listen to the record via the fixed output into your line preamp, integrated amplifier or receiver. Use the volume control to set the right input level into your recording device. Quite often a fixed output level is too "hot" for a digital recorder's analogue input and results in hard clipping. Turn the volume control down so you get just the right recording level.

The very best of EMC protection

The shielding provided on the Accession MC safeguards against the intrusion of unwanted electro-magnetic disturbances, which at best would colour the sound and at worst you'd hear interference from other devices. Make sure you use properly shielded interconnects with it so interference hasn't a chance.

Our eurocard 1U height cases save on space so you can have more things to enjoy without the worry of where to put them. They will stack on top of each other and will even work on their sides. They're remotely powered so won't make other sensitive items hum or buzz.

The Accession MC uses (and is supplied with) our PSU1 power supply which should be placed off-rack, keeping transformer influences away from your sensitive equipment, and most importantly well away from your pick-up cartridge. Remote DC power is the most sensible way to power sensitive equipment. There is no transformer inside your Accession MC to worry about, and no AC on its low voltage cord to induce hum into adjacent cables.