Available for dispatch
A note about availability and shipping
£1,600.00
Be the first to review this product

This is a superb DAC, I have tried and tested and reviewed the Majectic myself and it is absolutely gorgeous to listen to, just read the reviews below! We are also able to order Graham Slee Libran balanced or TRS to RCA cables to go with this and of course this will work in many systems with a choice of fixed RCA outputs (primarily DAC only) or balanced pre-amp outputs (perfect for connecting to the superb Proprius Monoblocks). Just contact us for prices or details.

We are proud to be authorised Graham Slee dealers and support all our products with pride - thanks all and happy listening! 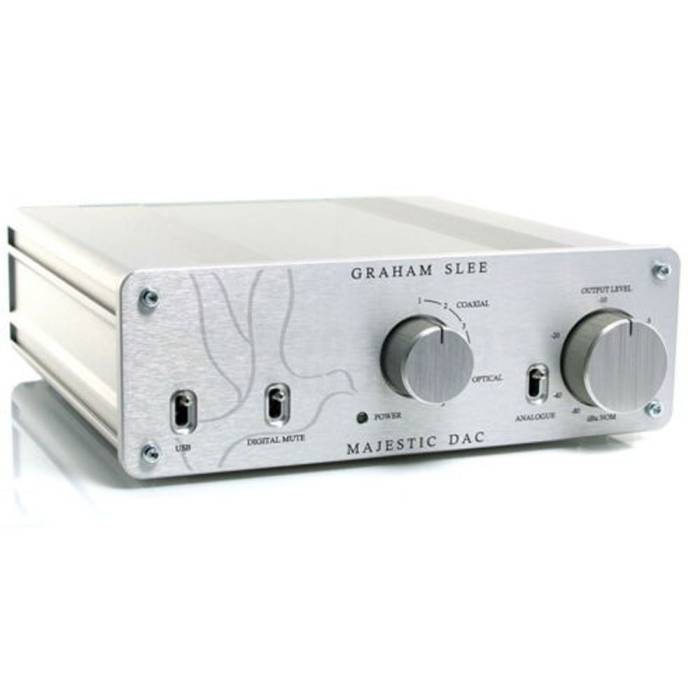 Digitally reproduced music from your stereo streamer or CD player shouldn't sound any different to that of natural sounding analogue, but so often it does.

The Majestic overcomes the "digital sound" so all you'll hear is the music.

What Do You Want From A DAC?

When you buy a DAC, do you (1) want to marvel at a specification printed on a piece of paper, or (2) play music and be drawn into it?

When auditioning a DAC do you (1) compare it to the sound of other DACs - or do you (2) compare it with how music really sounds?

If you answered (2) to both questions, the Majestic DAC will be your ideal choice.

Digital Preamp With An Analogue Input

The Majestic is more than a DAC - it's a preamp too.

Accepting inputs from hi-fi stereo streamers, CD players and computer hi-fi on its 3 x optical; 3 x coax; and USB input, the Majestic hi-fi pre DAC also has an analogue input. This hi-fi DAC with preamp works just like any preamp, so you don't need another.

Driven by a true stereo balanced DAC chipset, it has both fixed-level and variable level outputs: single-ended on fixed; and balanced (which can be used single-ended) on variable.

The fixed output will feed a headphone amplifier or you can record from it, and the variable output will drive a power amplifier - or even active monitors direct.

What really sets the Majestic apart from similar pre-DACs is the lack of harshness in its sound.

It's what makes it sound so naturally musical: Its digital chipset is run 2dB below full-scale to prevent the harsh sound of "clipping"; and its analogue filters work differently to other DACs.

1. their inherently fast slew-rate captures every part of the musical waveform
2. their inverting* topology does away with common-mode distortion
3. the filters operate balanced to complement the DAC chip balanced output, cancelling noise
4. they use our ultra-linear technique which gives true 180 degree local negative feedback at the most sensitive hearing frequencies
5. the filters won't "saturate" and distort on the loudest passages

This means you don't get harmonic artefacts - alien noises - embedded in your music.

Those noises are the very thing that makes digital music sound so-digital and unatural. And is why you should compare how a DAC sounds with real music...

Direct comparisons between the Majestic and others reveals that something is missing - with the Majestic you don't get the harsh sounding artefacts!

* absolute phase is maintained by phase inverting in the balanced filters

. . . I tried running the CD42 direct into the S/PDIF 192k input. Holy crap what a difference... This was really a 'I can't believe this' moment. The thing sounded like the speakers had been taken out from their hiding place 1m apart on a shelf and set-up 3 m apart on proper stands – I can think of no better description – a system that really serves as background only became analytical and musical in one moment.

. . . I'd been using my beloved and modified Micromega Solo as CD player along with the Oppo - both using their on-board DACs. But then I swapped to using the S/PDIF output on both and once again I was simply taken aback by the improvement in sound. DACs make a difference it's true, but I can honestly say that I've never heard one that offers such a shift, and a positive one to any digital source I tried. With both (excellent) sources the sound opened up, the space between notes expanded and a level of detail and ambience - natural, never pushy – flooded out.

Doing back-to-back tests with the Audio-Note Zero DAC was very interesting because there was a certain similarity. Both were open and energetic, the Zero majoring on the latter, but the GSP had it beat on sound depth and spacial awareness generally. Bass was similarly handled with the GSP being a little lighter and more defined. The Zero did more wall-of-sound where appropriate, the GSP clearly superior with something like 'Take Five' in both 'space' and the definition of leading edges. The Zero is just a simple DAC – the Majestic a full function multi-source preamp, that they went toe to toe says an awful lot and I have to say that as a DAC alone the Majestic took the contest by a head.

This is a Rolls or Bentley with real wood veneer not carbon fibre, and super soft suspension, not spine shattering hardness. This product oozes quality and musicality with a useful analogue input thrown in. Yes, there are cheaper DACs out there, but this one is musical where many out there might just be telling you fibs

I used a Clearaudio Performance DC turntable for analogue duties and my trusty Sony CDPX 3000ES on both the analogue and coax inputs to compare the DAC in the Majestic against Sony’s excellent own on board DAC. I have to say it was a close call between the two showing how good Sony’s original design was and how natural sounding and sweet the Majestic was with no digital nasties. My friend came over to hear the units and was mightily impressed. You could play anything digital through the DAC and it would sound very natural, dare I say analogue like.

Rendering of treble sounds is particularly notable. From new the treble sounded a little bright for my tastes, but it soon settled down to be clear, crisp and free from any “digital glare”. High percussion has a sparkle that’s never overdone and orchestral violins have a sheen underlined by the rich midtones that’s very appealing. In fact, much like a good moving coil cartridge. Speaking of which – as I mentioned in an earlier post – vinyl reply using the DAC as an analogue pre-amp was totally transparent and as good as you’re likely to get.

When I first listened to it I was overwhelmed by the clarity, detail and vibrancy of the sound that it produced. I couldn't believe that so much extra detail existed on familiar albums. why hadn't I been able to access this before? When you already think that you have something you think of as close to perfection just to know there is more available makes one very excited! I wanted to play all my old music to see what I've been missing!
- forum member: MSPHIL

Firstly, at the risk of repeating what has already been said, my impression is of a very ‘grown up’ musical signature without any trace of digital harshness. I have not experienced that before from CDs or digital files. Dynamics, attack and timing are also spot on, nothing is overblown or lacking. It is extremely ‘realistic’ sounding Comparing to what I had previously, it is as if an enthusiastic shouty teenager has transformed into a full range adult performer. It doesn’t mean the former was bad, however the Majestic is much more listenable and absolutely without fatigue over extended listening sessions. The biggest surprise has been with lower resolution MP3s where the improved smoothness is really noticeable. That is a nice little bonus
- forum member:

Overall I would describe the sound as smooth, valve like perhaps, but with considerable extension in the lower registers. It is not over bright in the upper registers, manages to tame the harsh sounds experienced from some poorer digital sources, but maintains clarity particularly with female voices and the leading edge of cymbal and snare drum strikes are really sharp. The bass extension gives good definition to each note, good articulation and no smearing of bass notes one into another. Detail retrieval is exceptional, as others have similarly observed with the Reflex. Previously unheard details such as noises in the audience or background become apparent. Soundstage is quite wide and realistic sometimes appearing to extend beyond the physical limits of the speakers and with well defined, stable imaging.
- forum member: BackInBlack

Nearly a week in to using the Majestic as preamp in addition to DAC. It's changed. Not enough "o"s in smooth to describe it (thanks for the line, Sherman Potter). Bass is tighter and a little deeper, but the extra texture (I use that word a lot in describing this thing) is a winner.
- forum member: Aussie Mick

Signal to Noise Ratio (A wtd.)

Specifications subject to alteration without notice in keeping with our continuous improvement policy.

PLEASE NOTE, THIS GORGEOUS DAC CAN ALSO BE ORDERED WITH OPTIONAL LIBRAN BALANCED INTERCONNECTS, PLEASE CONTACT US FOR DETAILS

The Graham Slee products that we sell are a bit special. They are all hand made to order in the UK and individually tested - there is no batch testing! You know you will be getting a very high quality piece of kit that will give you a feel-good factor every time you switch it on!!!
You will have to exercise a modicum of patience once you have placed your order! These products can take three to four weeks to get to you - many are assembled from scratch once you place your order, by a real person on a real bench!! .. but it will be well worth it!! We will provide you with regular updates once you have placed your order.
If you have any questions about these products please don’t hesitate to ask us - if we can’t answer the nice chaps at Graham Slee will save us!!!
We sell the entire range here at Phonostage Records and are proud to do so - so enjoy your shopping experience and GO TREAT YOURSELF!!! You deserve it!