Arrgh! You're killing me!! Yep, bad news, you are all wrecking your lovely vinyl records! 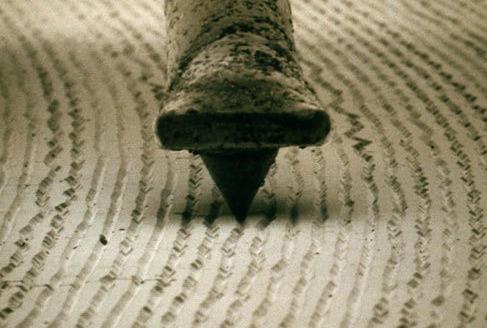 So are you going to pack it in? Well, put simply, there is nothing you can do to stop it... but there is a lot you can do to minimise it and make your lovely records last for years longer!! Here's how...

Ok - get real, are you really wrecking your records? Do you treat them like cup mats when they are not being played? Does the cat walk across them? Do you store them at all angles in a sunny bay window? Well if this is the case then of course you are wrecking them. Or do you treat them like super-thin delicate, shiny, china plates that nobody in the house is allowed to touch but you and that only get played on Sundays? Well - the shocking news is that you too are wrecking your records, it will just take longer!

The problem I am witnessing is that some people out there were not exposed to records when they were younger. I watched a program many years ago where they showed some unsuspecting kid on the street a record and she had no idea what it was and no idea what to do with it.. I think she bit it! I couldn't believe it! And I have now found out that there are some kids out there who have no idea what a CD is! Music just comes out of the computer - it has no solid 'form'. Weird concept to me not thinking of music in terms of vibrations and physical matter, but I can easily see how this has happened and can sort of imagine what it feels like. So when you then first get your hands on the incredible novelty plastic disc that contains music - like some sort of ancient huge flat memory stick - you don't think of it as something that you have to keep away from every hair on your head to keep it working. As I have said before KFC hands and Neil Young records should be kept away from each other.

However - today, the kind of destruction we are talking about is not death by KFC. This point is relevant only because the KFC hand generation are the ones who I think are most likely to unwittingly accelerate the destruction of their new prize quicker than they realise. So read this and take heed!

Let's imagine we get a block of wood, a nice groovy piece, like the non-slip decking type, and a pencil. Then with some degree of conviction draw the pencil across the grooves of the wood. You will hear the pencil vibrate across the grooves. Simple music!! If you do it a few times the pencil will wear out.. new stylus needed! So you sharpen your pencil and do it some more.. eventually you wear a groove in the wood.. new record needed! The harder you drag the pencil across the wood the quicker you carve a new groove in the wood. But of course then you snap the pencil more often.. 'Ahhh' you say 'get a thicker pencil!'. Good idea, now the pencil lasts longer - we can apply more pressure but the wood wears quicker. I sell thousands of records and play every one of them. The reason being that I still get fooled sometimes. I have picked out some that look lovely, well cared for and super clean. It could be forty years old and look fab. SO I play it and it sounds crap! Sort of fuzzy. Poor highs, cymbals that sound a bit like a tin of rivets being hit with a stick and distorted vocals that sound like they were recorded on an iPhone. I can't really sell it because lovely as it is it has severe play wear. It sounds like a 32kb MP3 compared to a FLAC download! This record has clearly been lovingly played on an Amstrad stack system or worse (Sorry Lord Sugar) for years.

You can of course see where this is going. Heavy needle, more weight, soon carves it's own groove. Finer needle, less pressure, longer lasting surface that stays more or less the same unless you draw on it for flipping ages repeatedly and don't have a life!

Just a note on needles (Styli) - if of course you go for the heavier fatter needle it will of course make a fatter groove! There is a lot to be said for keeping your needle in good condition and not letting it get too worn. A bloke once told me a tale about when he used to be able to get records out from the lending library! He used to take them home and tape them. The strict librarian used to ask him to take his needle in for inspection prior to letting the records out of her sight! A worn or chipped stylus damages records!

So the answer is simple. Stop using heavy tracking, fat needles on your records immediately. Easy!! Well of course there is a catch. Vinyl records and their associated equipment are not magical flat memory sticks. They are a mechanical physical thing, and to extract music from them takes other mechanical physical things - which are in turn controlled by mechanical physical laws. To make something track perfectly, accurately, and super-lightly is a feat of engineering.

So you haven't got more money? Are you not loaded? Rolling in it? Well - neither am I. I am a bit better off than I was when I was a student but I learned long ago that to get a brilliant sound out of your vinyl and make them last for ages you don't have to be rich and you don't need to have a massive anorak that protects you from socialising hazards. You just need to look into it a bit - just enough to stop you going to a high street store or supermarket and buying one of those £79 or less record carving machines they sell next to a rack of records. I don't want to decry anyone's products here but I can tell you that some of them track with a weight of about 5 grams. I have spent less on decks that track at 1.5 grams. But not everyone is going to go round the car boot sale looking for one of yesteryear's gems and putting it back on the road. I've had some fine old record players for very little money - Rega's, a Mitchell Focus, Linn Axis, some of the better Garrards, Thorens, Ariston etc. You could have some fun looking them up if you haven't heard of them. And for very little money (£25 ish) you could buy an Rega Carbon cartridge to add to a car-boot beauty, or for probably about £150 more than the cost of the record carving machine you could have an entry level 'real' deck that looks super-cool in your pad and does not eat records and comes with a cartridge and phono stage and Bluetooth and everything with hardly any set-up needed. Check out the Blue Aura PG1 in the Phonostage Store here! Bargain!

You could spend just a little bit more and get a lot more. Plus whatever you spend can be offset by the hugely extended life of your beautiful Iron Maiden collection or as was the case of a chap I was speaking to recently he has saved the life of his increasingly valuable Northern Soul collection by stopping playing them on heavy-tracking DJ decks. Oh yes, that reminds me - don't go thinking you are alright because you have your very fancy 1210's to play stuff on. If they are set up for DJ'ing which they often are they are just a posher way of trashing your records. Like being hit by a rich bloke!

A little note on mixing decks.. DJ decks are like a train compared to a sports car. They are terribly heavy and track really well - so well you can spin-'em backwards, dance near 'em, put a massive pair of bins next to them and they will never jump off track. Go on - ask yourself how they do that! With heavy engineering and lots of weight! However you can set your Technics up to non-destruct mode with very little effort and they make a fine deck - but they will be more sensitive to noise and vibration then their DJ counterparts so maybe not so good for partying hard. I would say if you are not doing a lot of mixing and have a pair of decks set one up for your nice records and one for the dance stuff and see how you go.

If you do decide to go down the reconfigured DJ route or the car boot route then it is a must that you take a look at this How To Set Up Your Turntable The No Nonsense Way and get the thing set up properly.. The video makes it all clear.

Lastly of course keep your records (and consequently your needle) clean!

A bit of dust is probably not going to kill a record now is it.. it might embrace the needle and make your record sound like someone is singing through a sweater but that's all.. but what is that dust? There is all kinds of gritty micro-crap that makes up that dust, not just bits of your clothing. Micro-gritty soily sandy crap that sticks to the invisible KFC on the record and hides deep in the grooves only to get disturbed by the needle and dragged round and round like a piece of greasy sandpaper is a real phenomenon!! Keep your records clean, they will last years longer! Look at the blog post 'Why Should I Clean My Vinyl Records' on the Phonostage Blog page - very entertaining reading!

So, as you can see, there are lots of things you can do to improve things - lots of affordable options. I am not just trying to flog you a deck here, I'd just as happily send you to the next car boot sale,  but I can tell you that I worry about some of the lovely items that leave our fabled warehouse that have lasted 40 or more years and have given many hours of listening pleasure and will give many more. I worry about what people are going to play them on since they will probably have dashed out to buy a record player to join in the vinyl revolution and I have seen the types of deck that the some of the big retailers are pushing. Well - don't be fooled by the man. Imagine if you had never heard of records and found out one day that they are pieces of magic plastic and that if you dragged a needle across them you could make them sing beautifully - but that they could be injured very easily and then wouldn't sing as well ever again - you would be very fricking careful with them. So think on!