Do cassette tapes really deserve to make a comeback? 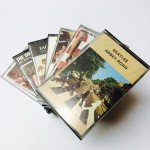 I've not had to go far this week before bumping into some speculative feature about the 'comeback' of cassette tapes. Actually i'm going to rephrase that without the inverted commas... we are talking about the actual comeback of cassette tapes, there's nothing inverted about it, and they would have to come right back - because they went right out! Furthermore I'm going to stop calling them 'cassette tapes', we all know full well they are either cassettes or tapes.

The thing with tapes, unlike vinyl they had nothing to offer that couldn't replaced by something better, consequently they replaced by something better, first recordable CD's then MP3's. Vinyl on the other hand was replaced by something more convenient - the Compact Disc - but arguably not better (as I've said before it is an argument for another day). Vinyl nearly totally eclipsed by CD's because they cheap (eventually), marketed as indestructable (you could spread jam on them and they'd still work) and played by an actual laser that actually existed in your actual house - not in space.

Now tapes were just a pain, they got tied up in your tape player because you didn't clean the heads and the rollers, you could extract it with care and try to wind it back on but if you were in a car you were knackered - Neil Diamond et Al. were often to be seen festooned in the hedgerows on a winter morning on the A6 somewhere near Chorley, glittering in the morning light. You had to wind them on with a particular make of pen to keep them tight.

Sometimes your player was so weedy it couldn't rewind the tape and you'd have to learn how to do it at turbo-speed with a pencil and not get tendonitis. The sound was awful, you could play a tape on one machine and it sounded alright but then it sounded crap on another - dull and swishy. The clever few realised you could adjust the heads but even that was making the best out of a bad job. And - to cap it all they wore out, you could almost hear the pace of degradation with your most played favourites - and you'd have to go copy it again.

Audio cassettes: and being 'a bit rubbish'

Cassettes had some tricks up their sleeves. They were designed to be a portable music format, more convenient and cheaper to manufacture and buy than open-reel tape and you could record onto it! And that was where a cassette was a big hitter. You could tape the charts on a Sunday night and sit anxiously trying to get to the 'pause' button just before the DJ started yapping over the end of the song** (which he was told to do to stop you taping it). You could have them in your Ford Cortina Crusader in a pop-out centre console tape holder (I'm guessing Thin Lizzy? Rod Stewart?) and actually drive around listening to your favourite albums.

However, great as all that sounds the MP3 knocked 'em dead. You could borrow your mate's copy of 'Thriller' and tape it and play it back on the school field or on a bling walkman 'the size of a cassette tape'. It did all that and more. It was smaller, more copyable (is that a word?), lasted theoretically for ever, sounded better in many cases and you could carry thousands of them around with you which at the time seemed beyond comprehension. The dodgy MP3 market boomed, 'face-off' Pioneer CD players and multi-changers played MP3 discs as well as CD's. Your computer became an entertainment system for the first time and MP3's needed no care or maintenance. And the final nail? The ipod.

Hit the Deck: The Cassette Tape Revival Is in Full

So why then do cassettes deserve to make a comeback? Well - they don't. Open reel might do, vinyl definitely, but tape? Oh I don't know, something is bothering me about this, I know they don't deserve it but there is a bit of me that wants them to.. I have a tape player in the fabled warehouse, I use it to test tapes that get in with stocks of Vinyl.

When I first got it a few months ago I cleaned the heads and put in a copy of the Pretenders and I loved it! Even though it was bloody freezing in there, I also then dug out 'Definitely Maybe' and some Jethro Tull. and carried on listening. And herein lies the dichotomy! It didn't sound so good in the cold on a JVC mini-system but I enjoyed myself... It was an experience, a process, finding them, getting them out of their little boxes, unfolding the card inserts and reading the micro-print! Yes!! It was fun - and I've got loads of them and I can't wait to play some more.

So.. is it nostalgia that will bring tapes back? No. Not entirely. That will work for people of a certain age but I suspect that it is younger people who will drive this. The people who didn't sit winding them on in a lay-by or buying an Aiwa 'tape-to-tape' so they could pirate the entire world. It will be people who appreciate the coolness of a mechanical device that has the music essentially 'stuck' to a piece of tape.

Where you can have an insert and a label for every single one with whatever you want on it. And you can give a compilation to a loved one (or someone you want to be a loved one) and look a lot cooler than you would if you Air-Dropped some tatty old mp3's on them... Oh yes; Cassettes do deserve a comeback, they don't have to be the best at anything (face it - they're not!), they will just need to be their quirky, cool, inconvenient and sometimes unwilling selves and people will fall for their little plastic faces and enjoy tucking them up in their little (cracked) plastic boxes at night..

**Kid Jensen! Are you reading this? You're back in business!