In the first episode of 'The Chain', Saffs – Artist, Engineer, Producer (Cornershop, Rob Swift, The X-ecutioners, Portugal The Man….) tells us about an album that hit him hard in his formative years!! 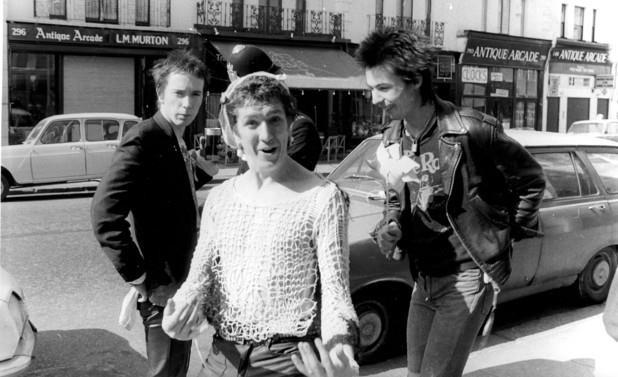 Each guest blogger will stake their claim in the chain then pass the mic to their chosen commentator – the Phonostage Blogaphonic Workshop will (eventually!) map the chain around the world and put a fantastic interactive map on the Phonostage Website so that we can see where it goes and who helped to plot it’s course…

We start back in 1978, it was somewhere in the Deep South of England...

It was 1978, I was 13 and already had a fascination with overdriven guitars played by sparkling, long haired glam rockers, but this day everything changed. I was watching Top of the Tops (BBC weekly chart show), as I did every week to see what was going up and down the charts and to see bands play, or mime, as the truth was. But this week was different, I saw something like nothing else. Can’t remember what chart number it was, but on came the video to “Pretty Vacant” by the Sex Pistols. My mouth dropped open. There was a man playing a white Les Paul (think sparkling glam) with a knotted hanky on his head! Like some 55 year old bloke sat in their swimming trunks and vest on Blackpool beach, but he was playing guitar, on a stage, with the best guitar tone ever (to this day, if you ask me). The singer sang like no one I’d heard before – or after really – the drums were so tight, slightly glam but different and powerful, the bass player looked like he was from the 1950s. It was mind blowing. Beyond all doubt I had to do what the guy with the knotted hanky on his head was doing. Make that sound, look like that, he just didn’t care – as it turns out, he really didn’t.

Soon after I obtained a copy of “Never Mind the Bollocks Here’s the Sex Pistols”. I hid the sleeve from my mum as I took it upstairs to my bedroom, it’s nigh-on impossible not to notice a cover with the work “Bollocks” on it. I played it quietly so no one could hear it – I’d happily played Bowie, Slade and many others loud before but this was dangerous stuff, to be kept at a guided volume for some reason! Actually, it transpired that my mum didn’t take offence to the title, or the music…

One of the many genius aspects to the record was that it made people talk. What was it about? What were ‘Punks’? The tabloids depicted it as a plague infecting youth.

To the music though. Today I still believe it is one of the best sounding records of all time. It changed music forever even though it was really quite benign musically. It was quite traditional, and cleverly so. Executed by two seasoned Producer/Engineers who’d already been involved in many significant recordings such as The Beatles, Roxy Music, Pink Floyd and Badfinger, amongst many others. It was a perfectly produced effort of huge sounding cleverly layered guitars, pounding drums (with many interesting miking techniques at work), rock and roll bass and snarling vocals delivered like no singer ever before with a story of England as a grey, depressed, politically conflicted shadow of it’s former ‘glory’. This vision projected into the future too, it was a grim time for England reaching out of the remnants of the Second World War to a time when the colour and balance was somewhat restored, debatably, buy a Blair’s Britain in the 1990s.

(Footnote: I met Steve Jones, the knotted hanky wearing guitarist of my childhood in 1999, at a Lenny Kravitz show in LA, no less. He was every bit as nonchalant and ineffectual as I’d hoped, deadpan and cool. I thanked him for his music, his guitar work, his sound and told the above story. He said thank you. I asked does he still have the white Les Paul, like many noted guitarists have their iconic axes? “Nah, sold it for some H”.)

Punk will never die, “God Save the Queen”